UPDATED: Dan Filson asks Brent Council, 'What do you know about £91m PFI?'

The 'World of Brent Council' is a strange place as any regular reader of this blog will know but the fact than Cllr Dan Filson, Chair of the  Scrutiny Committee, has to seek information via a Freedom of Information request to his own council, speaks volumes.

This is a request posted on the What Do They Know website:

1: What evaluation, if any, has been made of the Public Finance
Initiaive contract made apparently on 19 August 2009 for a period
running to 18 December 2028 for a cost of £91,573,000?
2: Does the report to councillors at the time of the contract set
out the cost savings supposed to be achieved by this contract?
3: Did the contract cover services (the information I have suggests
'real estate services' but what that covers is unclear,) beyond the
financing of a capital requirement, and if so what services were
they?
4: Is there any break clause in the contract should either party
wish to end the contract, and if so would the exercise of such a
break clause incur penalties, and if so on what scale?
5: What is known of the other party to the contract, e.g. Is this
the subsidiary of a major bank, and what contingent risks, such as
the cost of replacing this contract, would arise in the event of
either the other party to the contract or the parent company
becoming insolvent?

UPDATE July 17th Last night Cllr Filson in an exchange on Twitter justified using the FoI route, rather than asking the Council directly for the information, in conversation with a Green Party member: 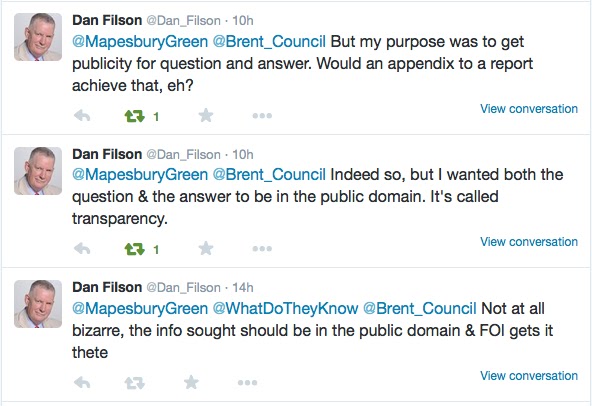 Cllr Filson may be interested in this article I wrote on Wembley Matters in July 2011 entitled 'Civic Centre costs shrouded in secrecy':

Opposition to the Civic Centre, now under construction opposite the Wembley Arena, is increasingly evident and Cllr Ann John has been forced to defend the project at the current round of area consultative forums. Residents in Kilburn have criticised the Council for being 'Wembleycentric' and neglecting land that could be redeveloped in South Kilburn while others have been frustrated when trying to pin down the actual cost of the scheme and mistrustful of assurances that the project is 'self-financing', 'cost neutral' and 'won't cost residents a penny'. They are told that the £100m centre will make annual savings of amounts ranging from £2m to £4m due to efficiencies' and moving out of other Brent buildings, and pay for itself in 25 years. Transferred to personal housing this is tantamount to saying that a new house 'costs nothing' if expenditure over 25 years is equal to the amount saved from not renting.

In the light of the cuts ahead and the diminishing role of local government it is not clear how many council staff will be left in 25 years and whether the building will even last that long - think of Willesden Green library, scheduled for demolition by the Council, which was opened only 22 years ago.

My Green Party colleague, Shahrar Ali, has made a freedom of information request for financial details of the Civic Centre, which have been shrouded in secrecy.


Clearly capital money is not free - it has a revenue impact and hence the strategy for future years will be to support programmes which are externally funded and those which deliver revenue savings which are equal to or greater than the debt costs. Conversely schemes requiring unsupported borrowing and have net debt costs must be reduced to a minimum or eliminated.

This gets to the nub of the issue of information. We need figures from the Council that will enable council taxpayers to assess whether the Civic Centre project meets this criteria.

I strongly suspect he's done this so that the result is public domain. Otherwise, the Exec could claim need for confidentiality.

This reminds me of the ludicrous situation when as an elected trade union branch secretary, the council refused to give me a piece of information which they then had to reveal when I wrote in for it as a borough resident.
At least in those days, Stephen Forster, Director of Law and Administration, had the grace to acknowlege this by sending the info to me through the council's internal mail accompanied by a rueful little personal note.

Council officers have always tried it on and made strenuous attempts to keep information secret for reasons known only to themselves. What has changed is that council officers have now become comfortable in (mis)using regulations, laws, etc.for the express purposes of obfuscation.

The convention has always been that councillors are provided with information by the established (paid) staff on request. Under this convention, there is no reason why Cllr FIlson could not have been given this information purely as an elected councillor. The convention was upheld by the respective party leaders who would complain vociferously to the Chief Executive if their members were denied information.
.
Party leader: Cllr Butt; Chief Executive: Christine Gilbert. Case closed.

No doubt the Willesden library was only knocked down because of the opportunity for housing, although the upkeep/renewal costs were very high as well.

The Civic Centre is not a parallel case to that, and will no doubt be around for decades.

The same can be said about how much the Town Hall was sold for. As to the Civic Centre being around for decades let's wait and see, currently hearing tales about the building constantly shaking when there's heavy work going on outside, shattered glass panes. Let's hope the new CEO does a thorough clean when she gets there.

Glad to hear something is shaking our Leaders :)

Cllr Filson, there is a difference between what people want and whether they should be given it.

Do you not realise that this handing out of information willy nilly into the public domain could do enormous harm?

Where would Wembley Matters be if Councillors started acting responsibly?

May I humbly request that you let sleeping dogs lie comfortably in their appendicies from where Martin has become a legend in ferreting them out on our behalf.