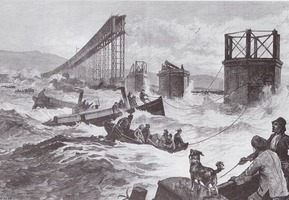 In the absence of Muhammed Butt, Cllr Michael Pavey presided over yesterday's Cabinet meeting with all the jaunty aplomb of the driver of the Dundee bound express as he approached the Bridge of Tay on 'the last Sabbath day of 1879, which will be remember'd for a very long time.'

The Cabinet was marked by a bitter exchange over the Preston Community Library,  an accusation that an officer's report had turned negative comments into positives in the Tudor Gardens consultation, and a warning that in the Bridge Park development Brent Council was dealing with a 'convicted fraudster'.

Even if Pavey was breezily unaware of what was happening the Brent Communications Team certainly were. No sooner had the meeting ended then the Brent and Kilburn Times reporter, seated in the front row of the public gallery, found three members of what appeared to be the Communications Team, looming over her.

They quickly whisked her off for a post-cabinet briefing in what appeared to be a damage limitation exercise.

As she disappeared with her escorts into the innards of the drum I called out, 'Publish and be damned!'

I hope she does but meanwhile keep an eye on Wembley Matters for more on last night's meeting.
Posted by Martin Francis at 10:10:00