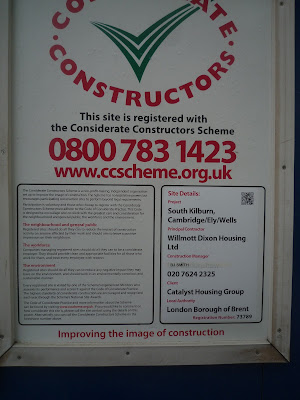 Guest blog from Pete Firmin, Chair, Alpha and Gorefield Houses and Canterbury Court Tenants and residents association
Readers of Wembley Matters may have noticed on many building sites around Brent posters showing “this site is registered with the Considerate Constructors Scheme” [CCS]. Very impressive, and their website http://www.ccscheme.org.uk/    sounds good too: “Considerate constructors seek to improve the image of the construction industry by striving to promote and achieve best practice under the Code of Considerate Practice”. My understanding is that being registered under this scheme is a requirement for getting contracts with Brent Council (and many others).
Having had problems with how (in)considerate Wilmott Dixon are towards those neighbouring their site behind Kilburn Park station in South Kilburn, members of our Tenants and Residents Association checked further.
The code of practice has various sections “Care About Appearance”, “Respect the Community”, “Protect the Environment”, “Secure Everyone’s Safety” and “Value their Workforce”. It would be interesting to know to what extent Councils monitor any of this, but our concern is with the “Respect the Community” section, where it states “Constructors should give utmost consideration to their impact on neighbours and the public; Informing, respecting and showing courtesy to those affected by the work; minimising the impact of deliveries, parking and work on the public highway; contributing to and supporting the local community and economy; working to create a positive and enduring impression, and promoting the Code.”
Having felt over the 3 years in which Wilmott Dixon have been our neighbours that we have not been treated with anything like the implied levels of consideration, we decided to submit a complaint to the scheme. Easily done via the CSC website, which also says
“When a complaint is received that is relevant to the Scheme’s Code of Considerate Practice, the site manager or company contact will be told what the complaint is about, and given the name and contact details of the complainant (with the complainant’s permission). Advice might also be offered as to how they might deal with the complaint.
The Scheme will stay in contact with the complainant until the site or company has investigated and responded to the complaint and until the Scheme is satisfied that the site is adhering to the Code of Considerate Practice, at which point the complaint will be taken off the ‘active’ list.”