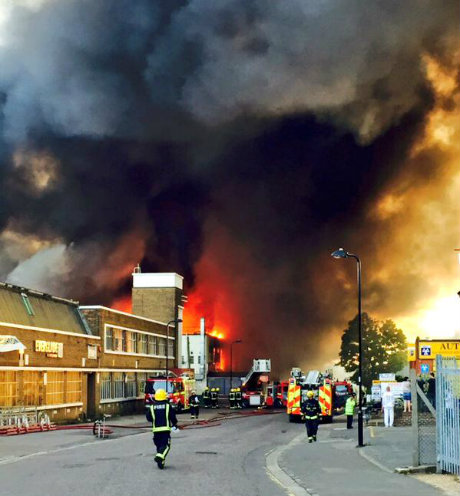 Around 120 firefighters and officers tackled a fire at a warehouse, containing a number of commercial and factory units, on Wadsworth Rd, Perivale this evening.

Around 30 people left the building before the Brigade arrived and there were no reports of any injuries. The blaze gutted the large 75 metre by 75 metre building and at the height of the fire smoke could be seen across the whole of London.

Station Manager Jeff Lisle who was at the scene said:

"Crews worked very hard in extremely difficult conditions to bring this fire under control. Firefighters used aerial ladder platforms to tackle it from numerous vantage points and to prevent the blaze from spreading to neighbouring warehouses.

“Although not in a residential area the smoke from the fire was travelling quite a distance so we advised locals to keep windows and doors shut as a precaution."

The Brigade was called at 1852 and the fire was under control at 2344. Crews are expected to be at the scene throughout Sunday damping down the fire.

The cause of the fire is under investigation.
Posted by Martin Francis at 10:12:00

This story for me emphasises the importance of keeping as many London fire stations open as possible.