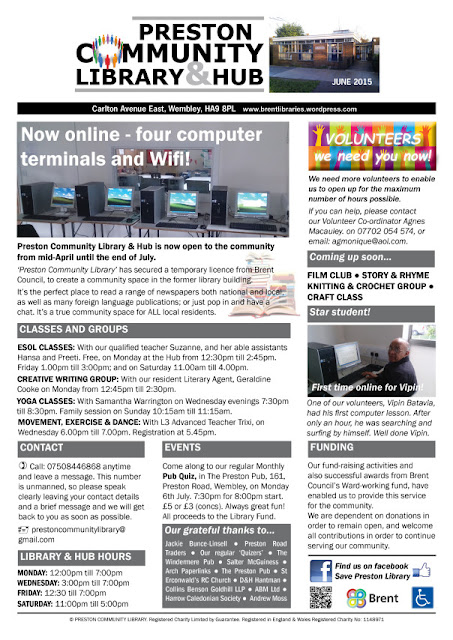 Preston Library campaigners went to Cabinet last night to raise concerns over the School Expansion report which will mean the Preston Library Community Hub restricting its activities to weekends from September.  The Council has decided that the former library building is needed for primary classes from Wembley High School as building work there is behind schedule.

Philip Bromberg from the campaign told the Cabinet that he was not convinced that there was no alternative buildings available (the report lists the former Anansi Nursery as available from July 2016 until July 2018 but states 'this building is no longer required').

He told the Cabinet about all the activities that are available at the Hub, including a cinema, with visitor numbers doubling. He said that the Community library was doing things that the Council had pulled out of and 'doing them very well'.  He told the Cabinet that if the Council could not succeed in cooperating with a large and successful group such as the Community Library and Hub, he could not see its strategy succeeding elsewhere.

After an optimistic letter from Cllr Mashari about joint design of the new facility in April little had happened with the promised collaborative approach and now the use by Wembley High was being discussed just 3-4 days before their licence ended, with no direct word to the Library from the Council.

A local film maker told the council about the sucecss of the cinema which had been funded with a £4000 grant from the council and had become a vital part of the local community with all showings at capacity. The grant would be a waste of money if the Library did not  continue.  He invited councillors and the governors of Wembley High School to visit the Community Hub. Campaigners were keen to establish as positive a relationship with Wembley High as they'd had with Preston Park Primary but this had not happened yet.

Michael Pavey agreed to amend the term 'pop up' used in the report about the library when a speaker said that it was a fully fledged community library with 663 visits in June.

Cllr Margaret McLennan, responding to the delegation, said the Council had always made it clear that the priority needs of the borough were school places and housing. These came ahead of the policy to bring buildings back to life. She substituted a new paragraph for one in the report which would now say that there was no prospect of disposal of the Preston library building until 2017-18 and options would be looked at for commercial or community disposal in August 2017 at the earliest.

To protests from campaigners Cllr Mashari said that she did not appreciate Philip Bromberg's claim that the council had reneged on a deal and had not responded to campaigners. She said that they had made it 'extremely clear' before the election that school places were a priority and the building had never been promised to one particular group. She concluded that the library supported 'fantastic community activities - but don't misquote us'.

Philip Bromberg asked for a right of reply to what he saw as a personal attack but Cllr Pavey refused.

Cllr Ruth Moher, lead member for Children and Families, said that places were needed so that schools had a 5% vacancy rate as required by the government. At present the soare capacity in Brent schools was only 2.3%. She was not expecting things to get any better in the near future but would eventually like to see buildings used as the community desires.

This is a relatively new requirement (I am not sure of its statutory basis) which is claimed to enhance parents' choice but also has the knock-on effect of increased pupil mobility, particularly in less popular schools, making it harder for them to improve.

Mashari really is a piece of work, isn't she. She made so much of Preston Library reopening: I've read what the library campaigns have had to say AND go to every Preston pub quiz, so can vouch for what Phillip B has said.

Mashari has a real hang up about being challenged in any way, which actually comes across as insecurity. She's hyper sensitive about the library issue - when she had the portfolio, she'd lose her temper if anyone ever raised the issue in council.

She also chooses to dictate who goes to what community meetings, too, and likes to ban people who might challenge her. Feh.

The Brent Labour election pledge was to offer Preston Library building "at a peppercorn rent to any local group who can provide a sustainable community library....that is our pledge....We will not open to competitive tender in order to give preference to local groups."

So was the Brent Labour manifesto a misquote Cllr Mashari?

Thank you for the report. I can only add that the council giveth then the council taketh away.

Although I'm grateful for any support, I've said before that I don't think people should use this site to make anonymous attacks on Roxanne or on anyone else.

Thanks, Martin, for flagging up the Anansi building, which has been converted for use as primary school classrooms but which is apparently now "no longer required". I have asked about this, and about other possibilities, and await a reply.

For the record, I do understand that school places are a priority, and have never said anything to the contrary. However we were promised a collaborative process, including co-design, which would allow the library to share the building with a school. That hasn't happened at all, and with two days until the end of our licence, I am STILL waiting for a written proposal from Brent.

A minor correction: Michael did, in fact give me a right of reply; it was so brief that you missed it.

The community spirit of all those who have kept Preston Library going is commendable - well done to each and every one of you. May your spirit and determination live on in harmony and in strength from harmony!