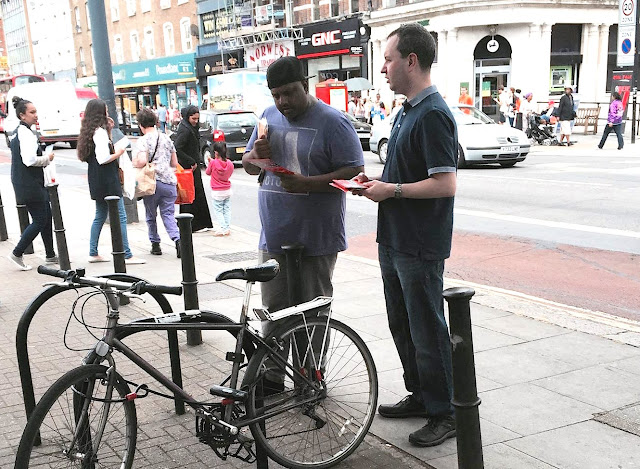 A meeting of Brent Central Constituency Labour Party added impetus to the leadership campaign of Jeremy Corbyn when they nominated him for the position of Labour Party leader this evening.

Brent LRC has been out on the streets campaigning for Corbyn. Tonight's decision represented a rebuff for Muhammed Butt, leader of Brent Council, who spoke in favour of Andy Burnham. Former GLC leader, London Mayor, colleague of John Duffy and MP for Brent East, Ken Livingstone, backed Corbyn.

I'm signing up to vote for Corbyn. Mainly in order to see the Kendall-supporting Cllr Bernard Collier's face looking a smacked arse if he wins

Excellent News as JC is a man who genuinly reaches out to people all over the world in struggle and solidarity of Human Rights! Keep up the Great work!

He'll be digging up thatcher as we speak to beg her to help David Milliband, Chukka Umunna or Sir Kier to come to the rescue. Councillors Kertcher Miller and Stopp will be right along side.

Michael Calderbank has posted this on Brent Fightback Facebook page:

Progress supporting Labour councillor in Brent, Bernard Collier, arguing that Jeremy is winning the nominations from CLPs across the country because the ordinary hard-working activists who attend the meetings are "twats" [he edited in the asterisks later] - he's still living in a dream world where Liz Kendall is going to win. Shows the contempt in which the right wing hold party activists

Pleased to be an activist. Brent CCG called my partner an activist recently, we are obviously doing the right things then.

Yes you are (doing the right things) although I think you'd qualify as an activist if you simply asked Brent CCG the time!

Asking the time can be considered to be a veiled threat or aggression Tulip Siddiq tells me.