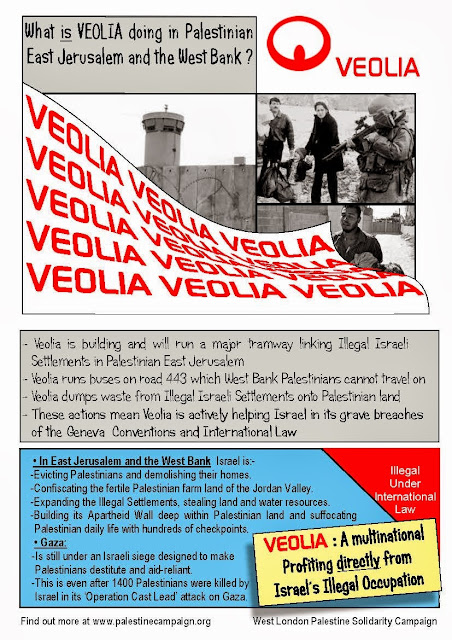 Labour Brent Council's Executive last night approved the awarding of the £142.3m Public Realm contract to Veolia despite representations calling for the company to be removed from the procurement process because if its alleged grave misconduct in servicing illegal Israel settlements in the Occupied Territories of Palestine.

The Executive was addressed by Dan Judelson of Brent Jews for Justice for Palestinians,  Cllr Paul Lorber, leader of the Liberal Democrat group on the council, and myself.

Executive members argued, to varying degrees, that they cared about human rights and the plight of the Palestinians, but that they had no option, for legal reasons and to get the best deal for Brent council tax payers, to award the contract to Veolia. Cllr Jim Moher, rolled out on these occasions as the Executive's blunderbus, accused me and Paul Lorber of attempting to wreck the contract with an eye on gaining electoral advantage next year. He said that people like us, trying to occupy the high moral ground, may be concerned about human rights but the man in the street cared about his bins being emptied. Muhammed Butt summing up said there was no greater advocate than him of the Palestinian cause but that the Council had to act legally and could not risk Veolia taking legal action against them for not following procedures. He added that faced with huge cuts in central government funding the savings the new contract involved was the most important issue.

Fiona Ledden, answering a challenge about lack of transparency in not informing  the campaign and the public of the legal advice she had received regarding  Bin Veolia in Brent's allegation said that she was constrained because it would be irresponsible to share legal advice with the public as it was privileged. It had been shared with members of the Executive behind closed doors. If the advice had been made public it could have been used by other parties in a Judicial Review. She said that she had received clear legal advice that Veolia UK was a separate company from that operating in Israel/Palestine and that in her communications with other local authorities she could find no case of Veolia being excluded from a contract.

This is the speech I made to the Executive:


When Muhammed Butt took over from Ann John as council leader he recognised, in the light of the library closures issue, the need to communicate with residents better and engage with them –
be a ‘listening council’


he wanted to move from ‘managerialism’ to


The public realm contract issue leads us to ask:


what happened to these intentions?


Veolia’s activities in the occupied territories of Israel are a moral and human rights issue, as well as a ‘political one’ just as British companies’ collusion with the Apartheid regime in South Africa was for the Brent Labour administration in the 1980s.


But from the beginning we were handed over to officers to discuss the issue – not elected members.


These officers were about as transparent as a lump of lead.


We gave officers detailed legal evidence on Veolia’s grave misconduct in the occupied territories – the procurement panel decided there were no grounds for exclusion of Veolia but gave no reasons why or how they had reached that decision.


We and our human rights lawyer met Fiona Ledden (Head of Procurement) to ask what legal advice they had received so that we could respond – they refused to tell us what the advice was and its source. We were put in the Kafkaesque situation of attempting to respond to evidence we couldn’t see. Our lawyer warned Fiona Ledden that this refusal could be used to press for a judicial review.


We asked if our allegations had been put to Veolia, they said no.


Surely any fair process would do that and should have in terms of protecting the council’s reputation.


When Veolia did write to the council, apparently of their own volition, they claimed to have sold the Tovlan landfill site. We submitted evidence that this was untrue.  No reaction from officers to being deliberately misled by a bidder.


When Enterprise asked for extra time to put in their final bid they were refused. The council’s reason for refusal of extra time are almost the same, and as unenlightening, as the refusal to exercise their discretion to exclude Veolia –


‘because that’s what we have decided.’


So no comeback for Veolia for giving misleading information to the council but instead officers’ action leaving Veolia as the only bidder.


If the officers refused to engage with us, what about the elected members of the executive?


Our petition with more than 2,000 signatures was presented to the executive. There was no response from the Executive member leading on the environment. It was referred to Fiona Ledden, head of procurement for consideration.  The same Fiona Ledden who had been stonewalling us.


A request to Cllr butt and Fiona Ledden for the outcome of that consideration was requested some time ago but only answered on Thursday. This merely said the council did not intent to revisit the decision not to exclude Veolia made on January 31st

in other words ‘we are ignoring your petition’

Our supporters made presentations on the issue to various Brent Connects forums. The notes say their comments would be referred to Cllr Roxanne Mashari as lead member for environment.  They have heard no more.


Liz Lindsay, Secretary of Brent and Harrow PSC has received no response to a request sent to Cllr Mashari in June, to meet with her and Brent members of Jews for Justice for Palestinians regarding the contract.


The officers’ report you are considering this evening makes absolutely no reference to any of these representations. If we had not made them public and written to councillors you will have had no idea that this is a controversial issue.


The GCs of both Hampstead and Kilburn and Brent Central Labour parties, Brent TUC and Brent members of Jews for Justice for Palestinians have supported our case.  We have been supported by several of the candidates for the Brent Central parliamentary nomination. Brent Lib Dems were ruled out of order when they tried to put a question about Veolia at full council.


I know that some members of the Executive have misgivings on the issue. Cllr Mashari herself, reporting on a visit to Israel/Palestine with the Young Fabians, paid for by BICOM (set up to ‘create a more supportive environment for Israel in Britain) said that the one issue she was repeatedly told should be addressed to bring peace was that of illegal Israeli settlements.


Apart from all of the above can the council truly save that they are sure of ‘best value’ for Brent residents in a process that led, at the final hurdle, to Veolia having no competitor for the Executive to consider.


In Q1 of 2013-14 there was a failure to reach targets for reduction in residual waste and increased recycling at a cost of £226,000 with Veolia the current contractor.


We suggest the Executive:


3.     Consider separating the parks/ground maintenance services from that contract to allow waste specialist companies to bid.


4.     Consider supporting an in-house bid for the parks/grounds maintenance contract