We have grown used to weather forecasts becoming increasingly scaremongering but if the storm forecast for Sunday night/Monday morning is as severe as feared, and its trajectory hits London, we could see substantial damage to one of Brent's greatest assets.

Barn Hill in Wembley Park, the remains of  Humphry Repton's Wembley Park Estate planted for Richard Page in 1792, contains many fine trees.  It lost a fair number of trees in the storm of 1987.

This weekend many of the trees are still in full leaf which increases the 'sail effect' when high winds hit. Isolated trees are particularly vulnerable as the full impact of the wind hits them.

I went out this morning in the Autumn  sunshine to record several of the trees in case they become victims of the storm. 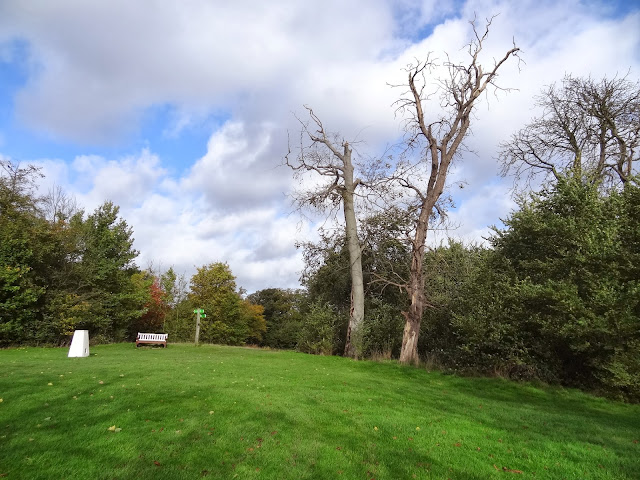 This pair are just about surviving at the summit of Barn Hill despite having been hollowed out by insects, woodpeckers and latterly, ring-necked parakeets. They may be saved by the lack of leaves and the fact that they have lost many of their branches already. 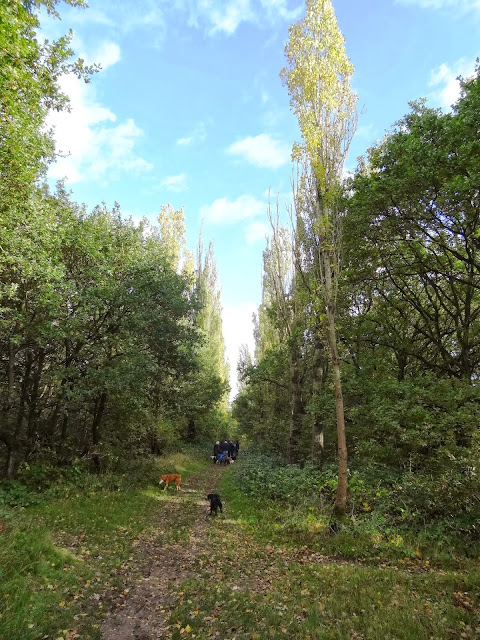 The avenue of Lombardy poplars which runs from close to the roundabout at Fryent Way to the pond on top of Barn Hill has looked vulnerable for some time. Planted in 1935, according to some accounts to celebrate the jubilee of King George V, they are out of keeping with the traditional English planing and so unpopular with some. However they are a local land mark, rising as they do above the other woodland, and form a crest that can be seen from miles away. Some have been lost already and others have many dead branches/ 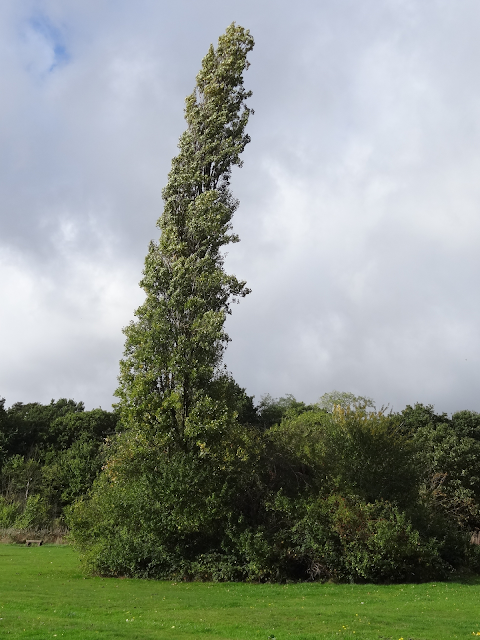 This 'lone Lombardy' was one of a pair on what local children called 'The Island'  on the lower slope of Barn Hill. Its companion fell in Spring 2012 and gave the children lots of climbing fun before it was eventually sawn up by parks' staff. It and another nearby on its own 'island' are exposed and still in full leaf and therefore vulnerable to high winds. They were already getting quite a battering this morning.

All this is of course part of a natural cycle and fallen trees provide habitats for insects and small mammals, and thus food for birds and predators.  They also provide space for new growth.

Don't know whether you've seen the message on the Met Office website, Martin, but the scaremongering you mention has reached apocalyptic levels. After detailing the direness of the 'extreme weather event' to come, the last sentence of the amber warning on their site reads: 'This warning has been updated to bring forward the end time' . I laughed at this, but then I noticed a report that Mt Etna has started erupting! All we need now is for Nicholas Witchell to appear on the 6 o'clock news and assure that the Queen and Prince Philip are safe. Time to head for the hills?

For information - here is an article I wrote on the Barn Hill Poplar Avenue for the Barn Hill Conservation Group newsletter in April 2004:

It is known from local maps that the poplar avenue along the Barn Hill skyline appeared between 1935 and 1940, but when and why was it planted there? Some people have suggested that it was to celebrate King George V’s Silver Jubilee in 1935, or King George VI’s coronation in 1937. I think that I have found the answer in the minutes of a meeting of the Parks, Open Spaces and Burial Grounds Committee of Wembley Urban District Council held on 13 March 1935.

In a report to the Committee dated 8 March, the Council’s Engineer and Surveyor, Cecil S. Trapp, referred to the loss each year of “decayed and rotting trees” and suggested “… that provision should be made each year to replace such trees by carrying out a regular programme of tree planting, as otherwise our Parks and Open Spaces would in course of time lack that charm to be obtained by avenues and clumps of trees.” He listed several possible schemes for the first year, including: “Barnhill Open Space: Plant approximately 4 dozen Lombardy Poplars in the form of an avenue leading from the top of the Hill to the gate on the East side adjoining Town Planning Road No. 17 (Kingsbury).”

The Parks Committee recommended that their Surveyor’s suggestions on tree planting should be adopted. His proposed figure for the funds to finance the plan was reduced from £100 to £50, and this was included in the Council’s budget for the year ended 31 March 1936. I have not seen anything in the minutes to confirm when the poplar avenue was actually planted, but it was probably during the winter of 1935 to 1936. And the “Town Planning Road” was soon renamed Fryent Way!

Cecil S. Trapp's 1935 suggestions on regular replacement planting of trees in parks and public open spaces are still as relevant today as when he made them.
Philip Grant.

Martin, your last para is so important. The ecological destruction resulting from the 1987 storm was caused by removing the fallen trees, rather than letting nature take its course. Hopefully the lessons have been learnt.

I AM in the hills. Shelter granted to any south Brenters on production of a bottle of red wine and a candle.

I think it has been as far as the management of Fryent Country Park/Barn Hill is concerned although there are still demands from some to 'tidy things up'. Veolia will be taking over the job next year and I only hope they have some experience of managing spaces ecologically. If not I am confident that the Barn Hill Conservation Group will make a fuss.

So are the trees still upright?

Yes, they survived but one other landmark tree lost. See update.