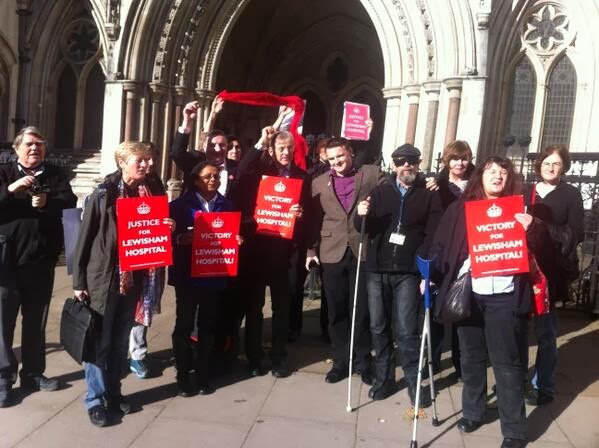 The Court of Appeal ruled today that Health Secretary Jeremy Hunt did not have the power to implement cuts at Lewisham Hospital in south east London.

Three judges announced their decision on the second day of a hearing in London.

Supporters of the highly-regarded hospital cheered when Lord Dyson, the Master of the Rolls, sitting with Lord Justice Sullivan and Lord Justice Underhill, gave their decision in an appeal brought by the Government over a High Court judge's ruling in July.

Mr Justice Silber had then ruled that Mr Hunt's move to downgrade A& E and maternity services was "unlawful".

"This expensive waste of time for the Government should serve as a wake up call that they cannot ride roughshod over the needs of the people
Posted by Martin Francis at 13:17:00

Excellent news! But not surprising, as the decision in the High Court was so clearly correct.
It is a pity that Jeremy Hunt had to waste our money (it is taxpayers who will have to pick up the bill, not the minister himself) at a time when his government is squeezing the Health Service to save money. I just hope that he does not waste further valuable resources by trying to take the case to the Supreme Court.
Philip Grant.