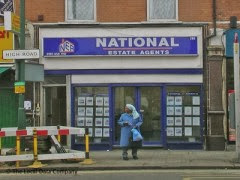 From Brent Housing Action. It is unbelievable that something that I remember in London in the 1960s has re-emerged. It appears that we must re-fight battles that we thought we had won.

A BBC Report today exposes the racism in Letting Agencies, naming and shaming two in Willesden that have openly shown they will illegally refuse Black tenants at a landlord's request.

In 1990 a Commission for Racial Equality report "Sorry, it's gone" showed that one in five accommodation agencies in thirteen locations discriminated against ethnic minorities. In this case, it seems all 10 that were tested were prepared to.

Brent Housing Action is calling a picket at National Estates tomorrow (Tuesday 15th October) 12.30 until 2pm, 75 High Road, Willesden Green, NW10 2SU  and we will march to A-Z at the other end of the Willesden High Road.

Willesden is at the heart of Brent, a borough whose history has been shaped by Black people, often through community anti-racist action. Even as the government is stepping up its attack on the non-white population through imposing new racist immigration checks on tenants, decades old racism still persists.

We will raise the issue tonight at Brent Question Time and Council meeting, at the Willesden Connects forum, CNWL on Wednesday night.

The next Brent Housing Action meeting is 7pm, Tuesday 22nd. We are already discussing the Redress Scheme, Trading Standards, Brent Council lettings regulation. We are or will be getting in touch with Brent Renters Campaign, CSHC, Brent Councillors, Black community groups, anti-racists, CAB etc
Posted by Martin Francis at 16:12:00

This is illegal. If there is not sufficient evidence in this programme for a prosecution, it is beyond belief that no one who has experienced what is shown will come forward and provide such evidence. Therefore, within a brief period of time, there will be prosecutions. Could someone update us on the number of prosecutions by, say, ...........ooh, what do they call that time when there was 'no room at the inn'?

Hi, i live in the Merton area sw19.. i myself is Black & my landlord is a muslim.
when the rent came in just too late from the council, i got a call from my Landlord telling me to pay up, his exact words were " You must pay, or move out... we never wanted you people in there in here anyway... unfortunately im still here as i cant move out, as ill be making myself homeless....
Now that my landlord has his office below me, strange things has been happening in my flat.
The Police were informed, & now he has given us a Section 21 to move out, because we called the Police.....