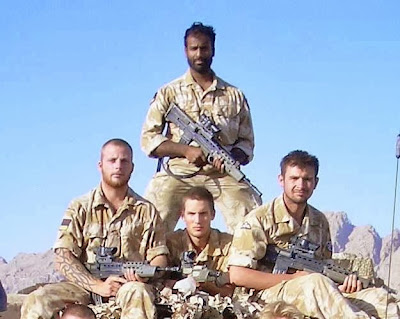 This weekend the Stonebridge Hub sees the first stage of Labour's selection of its candidate for Brent Central which aims to produce a shortlist which includes male, female and BME candidates. From his campaign blog photograph (above) it appears that Sundar Thava is armed with rather more than just arguments while Imran Ahmed may not have exactly chosen the people to win the Labour Party's rank and file's hearts and minds. He has published a 'Labour Doorstep' photograph on his blog showing him campaigning with James Powney and Lesley Jones.

So far males far outnumber females in the names I have been given but my list is not yet complete. Readers are invited to send in any additions or corrections. Dawn Butler, with only two other women in the race according to my information, is likely to make the shortlist.

You forgot Bernard Collier. How could you forget our Bernie, he's so memorable.

Posing in a picture with Powney - a sure fire way to not get residents votes IF selected.

On behalf of Freddie Flintoff I would like to request that the Sundar Thava photograph be removed unless and until he makes an unequivocal declaration of his position on 'Free' schools.