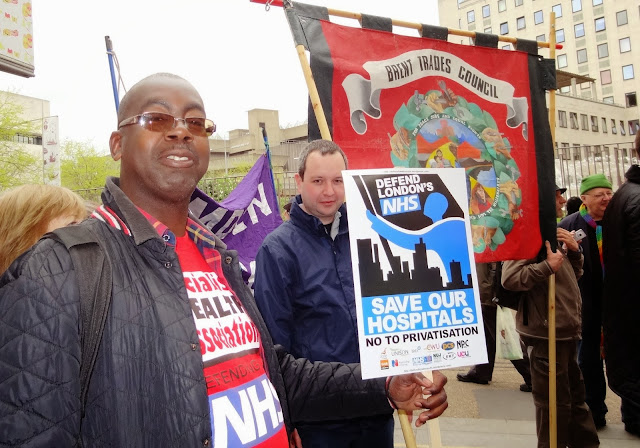 Jeremy Hunt's announcement today that Central Middlesex Accident and Emergency ward is to be closed will come as a bitter disappointment to Brent health campaigners, particularly after the euphoria which greeted the Lewisham Hospital campaign's court victory yesterday.

Hunt's decision shows that that the Tories have absolutely no understanding of the needs of an area such as Harlesden/Stonebridge and the social and health inequalities that make an easily accessible local facility so important.

Campaigners will be considering next steps along with those fighting for Hammermith hospital but meanwhile after the announcement  it is even more  important that as many people as possible submit evidence to the People's Inquiry into the London Health Service. Details LINK and attend the local meeting of the Inquiry which will be held. Send your views using this LINK
This is the trenchant evidence to the Inquiry submitted by Harlesden resident Sarah Cox:


As such, I was extremely concerned about the likely effect of the changes enshrined in the Shaping a Healthier Future consultation and also about the consultation itself.


I followed the consultation carefully, read the documents and attended meetings called by NHS NW London and public meetings organised by local health campaigns. Overall, the consultation was more like a public relations exercise. Its questionnaire was designed to reach a desired conclusion rather than to look at the real health needs of the vast area it covers.


I am very concerned about accountability. NHS NW London made the decision to go ahead with the changes, but went out of existence before the process of introducing them had even begun. Who will be accountable if they turn out, as many of us believe they will, to result in damaging cuts to our health services, rather than improvements?


Although I will concentrate on the likely effects of changes to the area in which I live, I believe that all the changes will have knock-on effects on neighbouring areas and I am strongly opposed to the whole package. My husband was referred from Central Middlesex Hospital where he was diagnosed with laryngeal cancer, to Charing X where he was expertly treated. The co operation between the two hospitals was exemplary. Cuts to any of the hospitals will increase the strain on the others and on the ambulance service.


I believe that the case for fewer specialist hospitals further apart has been made for stroke, heart attacks and some serious injuries and services have been developed in line with that. Ambulance crews know the best place to take such patients and expert paramedics are able to stabilise them before transporting them to the best hospital. However, I do not believe that the extrapolation to other conditions such as serious asthma attacks, is justified. The surgeons want a concentration of expensive high-tech facilities in fewer, larger hospitals. What they ignore is the vital importance to patients' recovery of being in a setting that is accessible to friends and relatives. There has been a great deal of publicity recently about poor standards of care on understaffed wards. The best insurance against inadequate care is the vigilance of patients' families.


In fact, although we are told that the plans are based on clinical evidence, they are really based on a desire to cut costs. It the plans go through, nearly 1,000 beds and 3,994 clinical jobs will go from hospitals in NW London, saving £1billion over three years. The remaining hospitals will not be able to cope, the ambulance service will not be able to cope, the 111 service is already inadequate and yet we are told that it is crucial to the success of providing alternative services in the community.


As a resident of Harlesden Ward and having worked on the Stonebridge Estate, I am most concerned with the loss of services at Central Middlesex Hospital and the impact on the people of Harlesden, Stonebridge and the surrounding area. The Brent Joint Strategic Needs Assessment and in particular the Harlesden Locality Profile (accessible through the Brent Council website www.brent.gov.uk) shows that Harlesden and Stonebridge wards are among the 10% of most deprived wards in the country. They have high levels of unemployment and of long term disease and disability. They also have a higher than average birth rate, and a larger than average percentage of young children and large families and higher rates of teenage pregnancy. Yet the maternity and paediatric services have been taken away.


Areas of poverty and poor housing like these have, it is widely recognised, higher levels of respiratory disease and mental health problems among other health problems. The government welfare cuts will increase these problems.


If health inequalities are to be overcome, health services should be provided where the need is greatest. If access to health services is difficult, people living in poverty and facing many other problems are less likely to seek help and relatively minor problems can become more serious.


Some of the reasons why it is wrong to close A & E departments at CMH and Ealing (these arguments apply to other hospitals in areas of deprivation):


·        A & E services are the first port of call for patients with mental illnesses and they are likely to find it harder to travel further for help.


·        When patients attend A & E, other problems e.g. cancer are often detected and can be treated before they become more serious.


·       There is no simple public transport link from the Harlesden or Stonebridge areas nor from Central Middlesex Hospital to Northwick Park and cabs are far too expensive for people dependent on benefits, so people who are taken ill or have an accident themselves or whose children are taken ill or have an accident will be forced to call an ambulance adding to the pressure on the ambulance service.


·       Transport difficulties not only affect patients, they make it hard for family and friends to visit patients. Support and care from family and friends are important for helping patients to recover. Negotiations with TfL even on the simple extension of the 18 bus route to Northwick Park Hospital have been unsuccessful, so patients and their families and friends from the area around CMH will continue to find access to Northwick Park extremely difficult.
Northwick Park is already struggling to meet targets and ambulances are being diverted back to CMH from there and from St Mary's. If all the proposed closures go through, how will Northwick Park cope with the added burden on A & E maternity, paediatric services, surgery and intensive care?

How will the ambulance service cope with the extra demand? It’s struggling already.


Has there been consultation with the Fire Service about the effect of the proposed changes?
Schools were not consulted by the Shaping a Healthier Future team, yet during the school day, thousands of children become their responsibility and if any are taken seriously ill or have accidents, school staff will have to go with them to an A & E department further away.

Out of hospital care

Of course it is always best to keep people out of hospital if appropriate alternative care and treatment can be provided in the community and of course we need more preventive services. We are promised all sorts of out of hospital care to take the place of the lost hospital services, but will the resources really be there? There is already a shortage of trained, skilled community health workers, health visitors, midwives and specialist nurses as well as GPs. Will the CCGs really be able to train and pay for those we need when they are facing constant budget cuts? Successful treatment and care for patients out of hospital demands integration with decent social care services, but the swingeing cuts to Local Authority budgets mean that social care services are at best barely adequate and unlikely to aid recovery and recuperation for patients who have been treated out of hospital or discharged early from hospital.

Getting information about the CCG’s commissioning decisions before they are made is extremely difficult. There are massive documents with quantities of acronymic alphabet soup and a hierarchy of meetings, some useful, most completely opaque to the interested patient or campaigner and suddenly, before you know it, another service has been outsourced and privatised.


However often we are assured that the changes to the NHS are clinically driven, it seems clear that the real drivers are financial the transformation of the NHS into a cash cow for the private sector so that even if it remains free at the point of use for patients, it will be run for profit.