The Officers' report on the Public Realm contract to be presented to the Brent Council Executive on Monday October 14th reveals that only Veolia submitted a final bid. Serco dropped out at Stage 3 due to internal changes within the company structure and 'issues relating to resourcing and targets' but more controversially at the final stage Enterprise, the only competitor to Veolia left, asked for extra time to finalise their bid. The report states:

Officers fully considered the merits of the request but determined that it was not appropriate to agree such an extension.

A spokesman for Amey, who now own Enterprise said unfortunately as there is an on-going procuremnt process, we cannot comment further at this time.
The officers' decision means that the comparative tables for the Invitation to Submit Final Tenders (ISFT) stage look rather ludicrous: 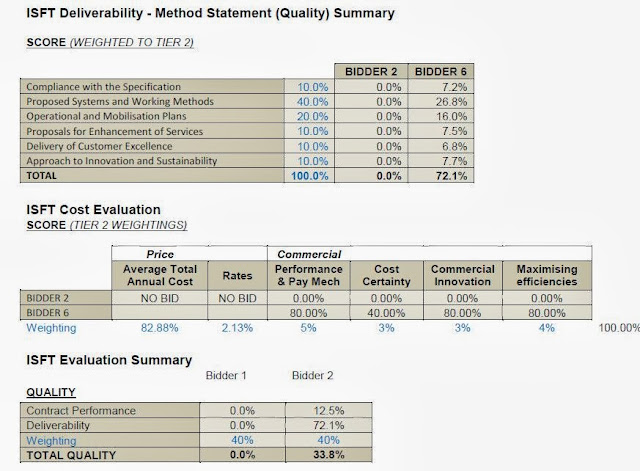 In an email to Brent Executive members I wrote:

It is clearly legitimate to ask if ‘Best Value’ has been obtained when such a large contract is awarded with no competitive bid to evaluate it against. It is also legitimate to ask why Enterprise was not granted more time to submit. (Enterprise has now been taken over by Amey)

The new contract is a mixed bag with some improvements envisaged for the service but other changes which impact on jobs.

The Council expects costs for the new contract to be £1.3m less in the first year 2014-15 rising to £1.7m in 2017-18. This is brought about by reduction in the crews of bin lorries and the expectation that all residents, except those not physically able to, will leave their bins at their property boundary. These changes will be implemented before the new contract with a reduction in costs this financial year of £300,000.

More positively, Veolia has undertaken to pay those who remain the London Living Wage, although that will be little comfort to those who lose their jobs. Volia has also undrtaken to fulfill the 'Safer Lorries' pledge which protects cyclists, to offer 8 apprenticeships and to take action to offer jobs locally through various agencies.

One aspect that may concern councillors is that Veolia will be responsible for monitoring itself:


The contract will be self-monitoring, meaning that the contractor is accountable for measuring, monitoring and improving their own performance with the council carefully auditing their performance. This, along with Key Outcome Targets set for each of the different services will ensure that the Contractor is motivated to deliver the services.

Veolia will also be dealing with complaints from councillors and residents in the first instance thus 'placing responsibility on the Contractor to ‘own’ and be accountable for service complaints'.

All new or replacement residual bins will be 140litre rather than the present 240litre. Large households or multi-occupied premises will be able to request a largr bin if they can justify it. Although increased recycling should mean a smaller residual bin is adequate I do worry that some of the fly-tipping so evident on our streets is the result of residual bins being full and residents then dumping the excess on the street.

There are changes to the street sweeping regime with the expectation that streets will meet the Grade A standard after cleansing and will not fall below Grade B:

This is clearly a challenge given the current state of our streets.

One of the main concerns of residents has been over parks maintenance. We are rightly proud of our parks and have witnessed the sensitivity of Brent staff in maintaining them properly, rather than the 'chainsaw' gardening that we see on some estates where shrubs are reduced to three dimensional geometric shapes regardless of whether they are about to come into flower or have a different natural shape.

Although the report says that Veolia has agreed to maintain the parks to Green Flag standard, without any further explanation it also says that the council will no longer submit  applications for Green Flag Awards. Given how the council has always proudly publicised these awards, and the tremendous effort parks staff put into achieving them, I can only ask why not submit applications? Surely the Award is a prestigious external audit of the success or otherwise of the contract?

The full report can be found HERE