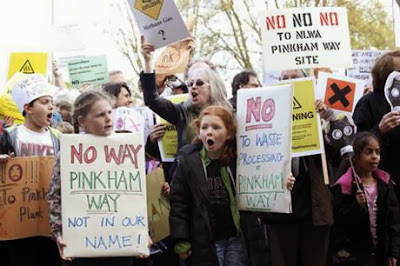 Euro-MP Jean Lambert has welcomed the decision to scrap plans for a massive rubbish treatment plant in north London, in the face of opposition from community, environmental and human rights groups.

The proposed site at Pinkham Way between would have handled about 300,000 tonnes of waste each year – more than 1% of the national total – from seven London boroughs: Barnet, Camden, Enfield, Hackney, Haringey, Islington and Waltham Forest, despite being less than 80m from the nearest housing and
with 14 schools lying within 1.5km of the site.

I am delighted that the North London Waste Authority has decided to ditch the proposals for Pinkham Way treatment plant. It’s a massive victory for local campaigners.

Now the North London Waste Authority should think about using existing sites more effectively, working to reduce household waste levels, and building smaller sites, closer to where the waste is being produced, where these prove absolutely necessary rather than developing systems that rely on ongoing waste production.

It was actually LAST APRIL when the NLWA withdrew its planning application for a "mechanical and biological treatment plant" at Pinkham Way, for residual domestic waste. That means you are a bit slow claiming responsibility.

What has JUST happened is that there is not now going to be a multi-billion private-sector contract to handle the NLWA waste, or at least not for another five years.

That does not necessarily have any bearing on what waste processing methods are used or where. It just means the operation stays in the public sector.

The Greens aren't claiming responsibility but are saluting the campaigners who secured victory. The planning application issue is linked to the NWLA's decision to end the procurement process: http://www.nlwa.gov.uk/news/newsdetail/2013/09/27/north-london-waste-authority-decides-to-end-procurement-process