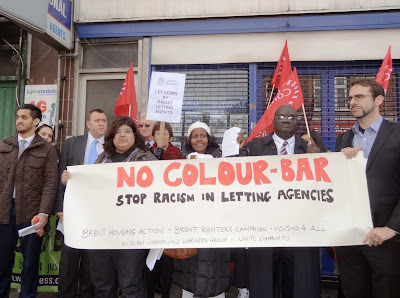 Following the revelations by the BBC that two Brent estates agents were amongst those who operated a colour bar on lettings to Black people, there was a demonstration at short-notice in Willesden Green today.

There was a picket outside National Estate Agents and then a march  along the High Road to A-Z Estate Agents,  The demonstration was joined by some Labour councillors, several of the parliamentary hopefuls for the Brent Central nomination, the Socialist Workers Party, the Green Party, Brent Housing Action, the Counihan Campaign, Unit the Community, Brent TUC, Brent Fightback and many independent activists including Alex Colas who has launched an independent Make Willesden Green campaign for the local elections.

The protest was joined by Khuran Siab and Kevin Smith of the Willesden Green branch of Harts. They said that they were disgusted when they heard about the racial discrimination, which they had thought was a thing of the past, and had decided to make a stand. 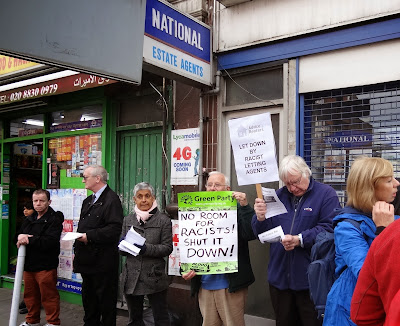 Robin Sivapalan of Brent Housing Action, told the protesters that Cllr Butt, leader of the Brent Council, had said he would be talking to Brent Council Trading Standards about possible action against the offending estate agents.

The demonstration drew immediate warm support from local people and cars slowed down so that the drivers could take a leaflet.  It was heartening to see the community once again united against racism.

Although action  must be taken against such letting agents and landlords it is really the housing shortage that needs to be tackled so that people aren't left dependent on the private sector. We need new social housing  with affordable rents - not luxury developments such as that at Willesden Green Library on the market to foreign investors.

Certain person given great prominence in BBC report of protest - star of stage, screen and......