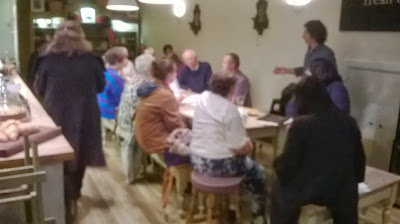 Alex Colas, the candidate for MWG, spoke about how residents felt unrepresented and unsupported by local councillors and others talked of Willesden Green becoming a backwater as Wembley became the focus of the borough. There were fears that Willesden would lose its sense of community as the public realm was degraded and housing became unaffordable for ordinary  families. Recent developments were reducing the area to a dormitory.

Alex said that his campaign would be carrying forward values which had started with the library campaign but would look at the bigger and broader picture in order to influence the council. He said that it would be a local campaign but not a parochial one. The Coalition clearly had a major responsibility for the current situation but the campaign would not let the Council off the hook.  We must fight for a democratic, representative Council.

Alex's agent said that Labour were trying to distance itself from the present administration, which began with Ann John's library closures by choosing new, young candidates for 2014, but the policies remained the same. In Willesden Green, Cllr Lesley Jones, who was part of the Ann John regime, was standing again.

The Make Willesden Green campaign has people responsible for four main areas of policy: education, housing, public realm and local democracy and is welcoming policy ideas from supporters.  It was hoped that people would come forward as 'street reps' to further the campaign.