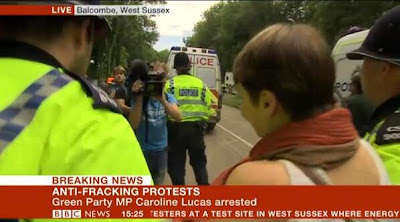 “Along with everyone else who took action today, I’m trying to stop a process which could cause enormous damage for decades to come. The evidence is clear that fracking undermines efforts to tackle the climate crisis and poses potential risks to the local environment.

“People today, myself included, took peaceful non-violent direct action only after exhausting every other means of protest available to us.  I’m in the privileged position of being able to put questions to the Government directly and arrange debates in Parliament, but still ministers have refused to listen.

“Despite the opposition to fracking being abundantly clear, the Government has completely ignored the views of those they are supposed to represent.  When the democratic deficit is so enormous, people are left with very little option but to take peaceful, non-violent direct action.”

Thanks to Steve Hynd for this statement which appears on his blog LINK
Posted by Martin Francis at 16:36:00