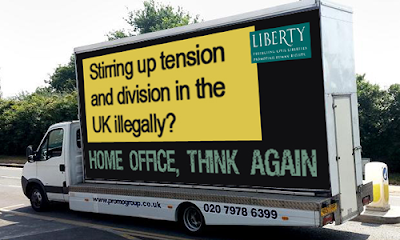 The Home Office have agreed never to run adverts telling migrants to go home again without consulting.
Following our letter to the Home Office, threatening legal action of the decision to pilot a campaign driving large vans around London which displayed messages telling migrants to ‘go home’, the Government has confirmed that if any further campaigns of a similar nature are planned, they would carry out a consultation with local authorities and community groups. The Government accepted that the purpose of consulting would be so that it could have ‘due regard’ to the effect a campaign of this nature would have on the communities living in the affected areas.

Our clients’ legal challenge was based on the Government’s failure to comply with the public sector equality duty under the Equality Act 2010. This duty requires the Government to have due regard to the need to eliminate discrimination and harassment based on race and religion, as well as to foster good relations between people from different racial and religious groups. Due to the inflammatory nature of the campaign, as voiced by several prominent public figures including Vince Cable MP and the leaders of Brent and Redbridge Councils, the due regard duty was high, and a consultation should have been carried out before the pilot began so that the Government could have properly considered the effect of the campaign before deciding whether to go ahead.

The one week pilot has ended. However, the Government has provided an assurance that if the Home Office were to carry out any further campaigns of this nature it would have due regard to the effect this would have on migrants living in those communities and in so doing would carry out a consultation. Any such consultation would of course have to be meaningful.

One of our clients, Raymond Murray, commented:

I’m very pleased the Home Office has seen sense and will do things differently in future, and hopefully they’ll never try a stunt like this again.

Refugee and Migrant Forum of East London (RAMFEL) and Migrant Rights Network (MRN) will be running a series of workshops across London to support those interested in campaigning against the Government’s anti-immigration policies. Solicitors from Deighton Pierce Glynn and Bhatt Murphy will be on the discussion panels. See here for further information.

The Claimants are represented by Louise Whitfield and Sasha Rozansky.


Register for the workshops HERE
Posted by Martin Francis at 12:06:00

I realise you are republishing the solictor's statement, but I don't read their response from the HO (which you link to) as positively. Firstly, it is at least as defiant as conciliatory. Second, I find no assurance that a local consultation would be undertaken in the event of any plan to repeat the vans, nor a commitment to one. Acknowledgment by the HO of the concerns lodged to date does not a commitment to future consultation make. A successful court case, on the other hand, could settle the matter incontrovertibly.

The solicitors in their statement say: However, the Government has provided an assurance that if the Home Office were to carry out any further campaigns of this nature it would have due regard to the effect this would have on migrants living in those communities and in so doing would carry out a consultation.