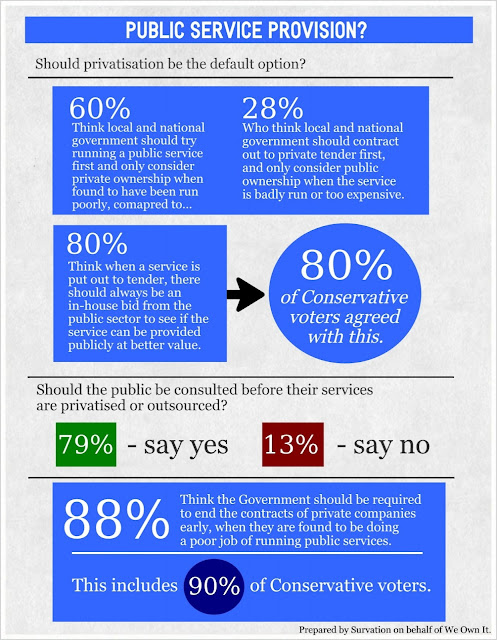 The We Own It campaign LINK  will launch their report on the need for a Public Service Users Bill on Monday. The Bill would promote and protect high quality and accountable public services.

Meeting your needs – whether that's at the doctors' surgery or at the post office – should mean giving you time, attention and care. Public ownership makes it easier for staff to take the time that’s needed rather than squeezing services to boost profits. This means that when public services are in public hands, they tend to be better run. Local authorities across the UK are bringing services in-house to improve their quality and value for money.

Public services are something we all pay for, and we all use. Public ownership means your money is better spent, both locally and nationally. Money can be reinvested into services to improve them, instead of subsidising the profits of private companies. Savings are also made because services are integrated and there is no need to manage contracts. Publicly run East Coast rail has saved the taxpayer £600 million and if water was in public hands, household water bills would be around £80 a year cheaper.

When public services are run by local or national government, it's easier for you to know who to turn to when you want to complain, and to have your say in how you want services to be improved. The public sector must make data available to you and respond to Freedom Of Information requests (unlike the private sector). Public ownership also means it's possible for the whole of society to decide on a goal (for example, a long term energy policy) and achieve it efficiently. Most people want public services to be provided publicly and almost all of us want a say in how they are run.

Public services are something we all share. When services are owned by all of us, it's easier for staff to work with service users and community groups to improve them. This can and should involve imaginative ways to keep making them better. In the 21st century, public services should be about people, not profit. Public ownership can sometimes involve the voluntary sector, social enterprises and cooperatives where that's the right solution, and where there are safeguards in place to protect public assets.


5. Examples all over the world show that it works better

In the UK, despite the current drive to privatise, many local authorities are bringing services in-house to boost satisfaction and save money. Across Europe, public ownership is making a comeback. For example, the water in Paris is now owned and controlled by the city, and in Germany energy is being generated locally by publicly owned utilities. In the US, a fifth of all previously outsourced services have been brought back in-house.

The Bill would ensure:


Public ownership would be the default for public services

1. Public ownership would be prioritised as the default option that is looked at first, before contracting out (supported by 60% of the public). Local and national government would always explore best practice public ownership, before turning to private companies.

2. There would always be a realistic, thorough in-house bid from the public sector whenever a public service – local or national - is put out to tender (supported by 80% of the public).

3. The public would be consulted before any service is privatised or outsourced (supported by 79% of the public).

4. Organisations with a social purpose – the public sector and genuine cooperatives, mutuals, charities and social enterprises – would be prioritised in the tendering process (supported by 57% of the public).


Private companies running public services would be held to account

1. The public would have a ‘right to recall’ private companies who are doing a bad job (supported by 88% of the public).

2. Private companies running public services would be transparent about their performance and financial data - as in the public sector (supported by 88% of the public).

3. Private companies running public services would be subject to Freedom Of Information legislation - as in the public sector (48% of the public mistakenly believe this is already the case).

4. The public would be properly consulted about the services they receive through public service contracts.
Posted by Martin Francis at 16:52:00

as I walked back To where I live I looked down at the pavement as normal and as usual it was littered with cigarette stubs and empty cigarette boxes along with the usual fast food boxes in the bushes along with empty fruit juice boxes and tins and empty crisp packets.
when I see these things it just reminds me of the sad sad reality of Life in Britain in 2013.
people are born and amazingly they seem to follow the crowd in the sense of not being bothered to dispose of waste products in the proper way and so they buy these products and instead of looking for a dustbin they just drop them on the pavements and alongside the kerbs and in the bushes and just walk away.
then when the people that are employed to pick up what the public can't be bothered to dispose of properly they often do a poor job and just sweep up 50% rather than 100% and as usual the local authority does not seem to care either in that while these things are happening they focus on other things which they obviously view as more important.
and as a result the problem(s) increase.
I have reached the conclusion that we live in a exploitative society in which the people at the wheel aka members of parliament and councillors give their consent to businesses to target and exploit the public.
and some of the most popular ways is by allowing cigarettes to be sold even though they know that it does not benefit the public but instead it hurts the public and amazingly the authorities turn a blind eye!
yes they ignore the fact that what they consent to does more harm than good.
it is reasonable to suggest that they are blinded by greed so much so that even after needless death after needless death and pressure building up within the NHS they just continue allowing the exploitation to continue.
why?
because although it hurts the public, what the government and the businesses gain in terms of profit is what is important to them.
and then they hypocritically start with their so called reforms and try to convince us they have so how changed and are now trying to build a decent society.
I consider that as a insult to literal injury.
it's comparable to Believing what the devil says in other words there is good reason to doubt them...why?
because they are wicked corrupt hypocrites.
them being at the wheel of government is as preposterous as putting a hopeless alcoholic behind the wheel of a bus or train and expressing shock and surprise when He or she Crashes seriously injuring the passengers and even themselves.
or it's like employing a pedophile to look after children and Again expressing surprise when the person starts abusing the people in their care.
a man once wrote that life in our time would be critical and hard to deal with because men would be Lovers of Money.
Just Look at the society we Live in and the problems building up because of that and You will surely agree that it is True.
we are certainly Living in a country and world in which Profit is put first and hypocrisy and double standards are overflowing wherever the Politicians etc are.
one more thing...I used to volunteer for a well known charity and I was absolutely shocked when I saw how my co workers were misusing the trust put in them.
I think it is safe to sat that the same thing is happening on a daily basis within government.
and I long for the day when they will all be called to account
I hope I will live to see that day because that will be the day when Justice will have at last been done.
and that the people that have been abusing and exploiting the public will never be allowed to do it again.
That day I will cry Tears of Joy and Feel a sense of Happiness That I don't think I have ever felt in all my 46 years in this haven of torment and exploitation aka planet earth.