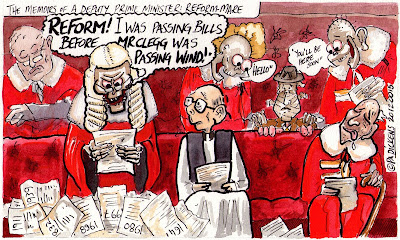 I'm not happy about adding credibility to a rotten system but the Green Party made a democratic decision on this:

Today's announcement from the Green Party


She has been a London Assembly Member for 13 years, which has included being Deputy Mayor of London, and prior to that was Chair of the National Green Party Executive.

"It is an honour and a privilege to be chosen as the Green Party representative in the Second Chamber. My holding the Metropolitan Police to account for over a decade has shown me that issues around policing are a constant concern UK wide and there's a clear need for strong voices protecting civil liberties and the right to protest. I am looking forward to a new battlefield for green ideas and policies and I shall do my best to fulfill the trust and expectation that my party has shown in me."

Natalie Bennett, Green Party leader, said: "I'm delighted that the Green Party has provided the second chamber of the British parliament with its first elected representative*.

"We can only hope this can act as a spur towards wider reform of this house, for which reform has been promised for more than a century.

"Reform was included in the manifestos of the three largest political parties in Britain in 2010, and it isn't too late for action within the term of this parliament."

Natalie added: "Jenny will be an excellent addition to the second chamber, and one small step towards political balance there. Of course a full-elected chamber, on the basis of a proportional vote, would produce a body entirely reflecting the democratic wishes of the British people."

* Jenny was selected as the Green Party's top candidate for the House in an open ballot of all Green Party members.

"The appointment of Ms Jones to the Second Chamber restores the Green Party back to its previous level of representation prior to 2008. " (GP press release)
Is this true? Wasn't the previous Green peer a hereditary peer who chose chose to sit as a Green? therefore he was never an elected representative of any one.

Tim Beaumont was not a hereditary. He had been appointed by the Lib Dems. He was then their president.

Later he crossed the floor and joined the Greens.