Round 1 allotments victory: that's the way the Pickles squirt! 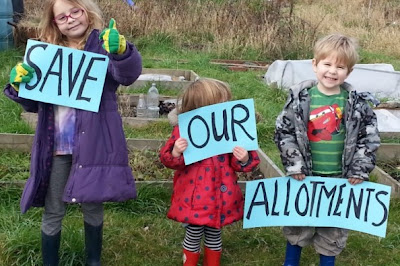 The Farm Terrace allotment campaign was celebrating this weekend after Eric Pickles was forced to admit his department had made a legal error when approving Watford town council's plans to build on the site. His department failed to explain why it had approved the decision despite the allotments still being in heavy demand.

The decision will now have to be reconsidered and although this may still eventually result in approval of the plans, the campaign to save the allotments is celebrating a 'Round 1' victory. Allotment holders had applied for a judicial review and raised more than £6,000 for a fighting fund through the GoFundMe LINK crwod funding site.

The news brought congratulatory messages from a wide spectrum of supporters with some hailing a victory for 'people power' and making connections with the Lewisham A&E Campaign and the campaign against the Bedroom Tax.

This is good news ahead of next week's National Allotments Week but a government report in 2011 revealed that 50,000 allotments had been lost in the previous 15 years.  Allotees will have to remain vigilant. Some councils have provided additional allotments in the face of growing demand recently and there have been schemes to provide temporary alloments on land awaiting development as well as in 'common areas' of  social housing estates. However pressures on sites will continue as developers seek new land for housing and retail development and hard-pressed councils look for a cash boost.

Brent Council recently advertised vacant plots at seven allotment sites but there are significant waiting lists at others.

Although I have not heard of any sites under threat currently, the new tenancy  agreement circulated to allotment tenants last week does include clauses giving Brent Council the right to terminate the tenancy at a minimum of 12 month's notice 'where the Council requires the Allotment for any purpose for which it was acquired by the Council...or has appropriated them to another purpose under any statutory provision, or if the Council requires the Allotment for building, mining or any other industrial purpose, or for roads or sewers necessary in connection with any of the aforementioned purposes...'
Posted by Martin Francis at 12:35:00