I joined many Greens and anti-war protesters on the Syria march this afternoon and it was great to see so many young people and families present. We were  united in wanting to reinforce the message to the Coalition government to keep out of the conflict but also in calling on President Obama not to attack Syria.

Green Party leader Natalie Bennett spoke for many when she called on the government to focus on humanitarian aid, call off the up-coming London Arm's Fair and abolish Trident.

I would add that given the widespread lack of confidence in politicans word on these issues that it is imperative that the findings of the Chilcot Inquiry be published as soon as possible. 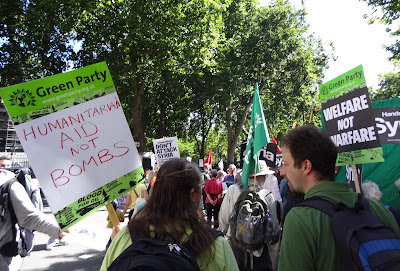 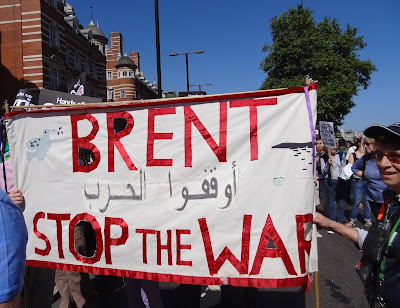 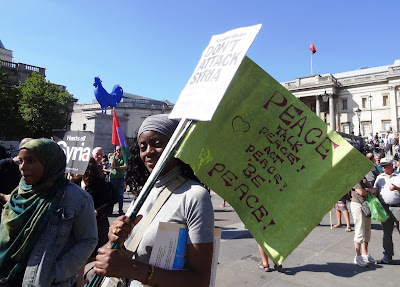 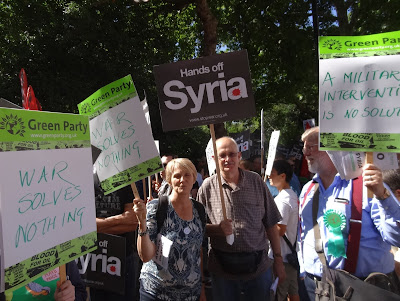 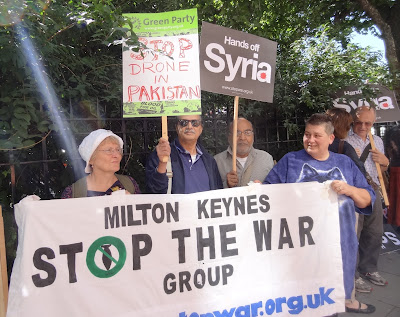 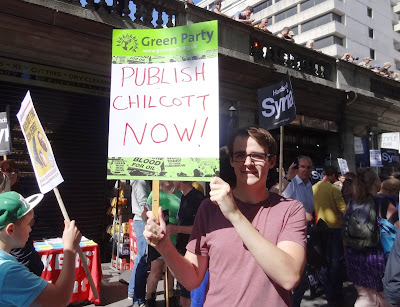 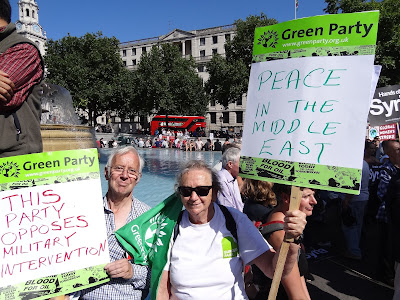 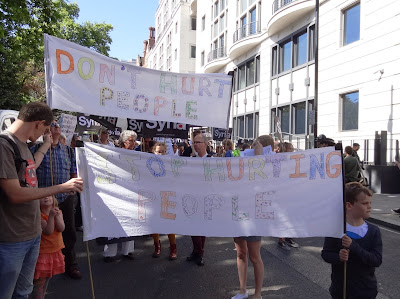 Two Banners Used by Green Party Supporters called for an end to the hurting of people.
Now that is Admirable and Unquestionably Worthy of Attention by those in Power.
However The sad reality is That those in power Have long Ignored the reality of what happens when Human Lives are taken for granted.
a Good but bad example of that is the habit of smoking and what that habit does to those that practice it.
if you set light to a piece of paper you know that the paper will be reduced to ashes by the fire.
Therefore you wouldn't take your money...say a £50 note and drop it into a blazing fire because you know that the fire will destroy it and what was of value to you moments before will be reduced to useless worthless ashes.
and because you know that will you are alive that £50 is of value to you...i.e. can pay to keep a roof over your head...pay to keep your cupboard stocked with food and drink to keep you alive.
it can pay for clothes to put on your body each day.
it can pay the cost of going on holiday...the list of things money can do is endless.
Therefore few people if any would disagree that Money isn't worth Taking care of!
but what use is money to a person with severely damaged Health and the damage done to their Health was caused by a decision they made to start smoking?
if you observed people burning money you would Think they had lost their minds wouldn't you?
and why?
well because you know of course that money is valuable and to destroy it is reckless to say the least.
but what about a government that decides that it is going to permit the marketing of cigarettes to the general public?
what would you consider that to be?
reckless?
unquestionably!
wicked?
definitely!
and when you Hear on the news That a Priest has been arrested for some kind of abuse, you are shocked right?
and why are you shocked?
isn't it because you are aware that a Priest is someone working on behalf of a Holy spirit in the Sky and his Human are obliged to Live by his standards.
and when you Hear of a MP being arrested for Fraud for example again you are likely to be shocked because you again have a general understanding That MPs are obliged to Live by the Laws they Expect us to Live by and when they break those Laws it is clearly wrong.
so when we hear of Politicians Talking about Attacking another nation we likewise feel uncomfortable because we know that for example when guns are pointed at people and the triggers are pressed, the targets will end up severely hurt and often dead.
believe it or not Christian Nations are obliged to Live by Christian principles.
in fact all nations are obliged to live by Christian Principles because we are all equal
we are born the same way and we die the same way regardless of how many religious beliefs exist on earth.
When we fulfill our obligations we benefit.