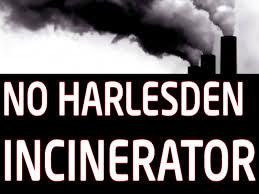 It's funny isn't it, how crucial decisions affecting the lives of local people are often made in the dead days of the summer school holidays? Following Barnet Council's go ahead for the controversial tower block city on the edges of the Welsh Harp, Ealing Council will decide on the equally controversial 'Harlesden Incinerator' on August 14th. DETAILS

The plans for yet another waste facility in an area which borders Brent but where the decision is made by a different local council (as with the Welsh Harp), has met widespread opposition, not just for the impact on air quality in an area devoid of any 'green breathing spaces' but also in terms of the numbers of heavy trucks that will come trundling through the local streets.

It appears likely that the intention is to rubber stamp plans which did not even figure in the options outlined in the grand West London Waste Authority plan.

There is a Harlesden Town meeting on Monday August 12th and perhaps that will be an organising opportunity for a vociferous Brent presence at the meeting on the 14th.
Posted by Martin Francis at 12:14:00

If I was a Father of Young Children The Country I would want them to grow up in is one Which put Principle before Profit and therefore see the sense in removing cigarettes from shop shelves since the consuming of cigarettes damages health and destroys lives.
I would also want to see an end to violent video games in which young Children are mislead into believing that fighting and killing etc is fun when the reality is Fighting often ends up with deaths which is far from fun.
I would also want to see an end to political corruption in which authority is misused and justice is often Left undone and the impression is given that Right is Wrong and Wrong is Right While hypocritically claiming to be Christians.
Lastly it is right to Teach our children that Life is a gift and the earth is a unique gift and Humans are obliged to take care of it.
and when they do so they will benefit.