Some prickly characters seen in Wembley 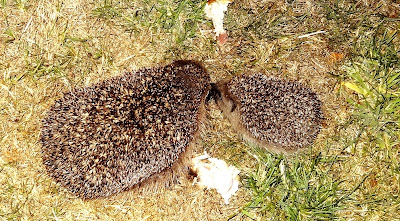 I was cheered up on seeing these hedgehogs late last night on my way back from the Wembley Green Man. They were on the lawns in front of the flats on King's Drive, opposite the former Town Hall Library.

It is estimated that the population of hedgehogs in the UK has declined from an estimated 36 million to just 1 million affected by loss of habitat and increased traffic fatalities.


Readers of the BBC Wildlife magazine recently voted for the hedgehog to be the nation's wildlife symbol which the Green Party welcomed as appropriate as it represents the threat faced by many species.

That's really good news. There used to be lots in London, but it is years since I've seen one. Has anyone else seen any about?