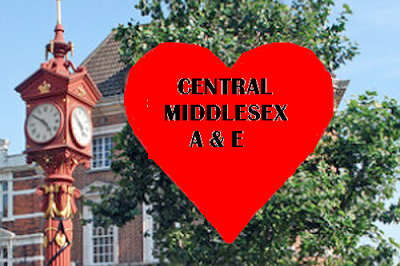 An Equality Impacts report commissioned by NHS managers into the closure of four West London Accident and Emergency facilities LINK has confirmed the fears of many campaigners. The report by consultants Mott MacDonald into the closures of A&Es at Ealing, Charing Cross. Hammersmith and Central Middlesex and the reconfiguration programme under the Shaping a Healthier Future proposals concluded:
The report's authors believe no ambulances will take more than an extra 10 minutes to reach an A&E  after the closures but of course that could be an extremely crucial 10 minutes.

Dr Onkar Sahota, chair of the London Assembly health committee,told the Daily Mail LINK  that he thought their calculations were wrong:  'There is clear evidence that when travel times are increased, mortality rates go up'.
Posted by Martin Francis at 11:44:00

'There is clear evidence that when travel times are increased, mortality rates go up'.

There is certainly clear evidence that being taken to a large A&E, where doctors have more experience and 'turn-over', means that mortality rates go down, and patients have better outcomes.

That has already happened with the reorganisation of stroke services in London.

So it is purpose of properly equipped and staffed ambulances to stabilise patients for longer journeys. But without proper funding for that, the deal is off.

One can't always get an ambulance. Some years back I was told off for getting late to casualty and that I might have lost a couple of fingers, yet when I'd asked for an ambulance I'd been told to get a minicab. Another time more recently I was taken ill after work and when I got home tried NHS Direct,a nurse advised me to get a minicab to the nearest hospital. I was living near Central Middlesex then and could walk it, but the A&E was crowded and I had to wait quite a while before being seen, and then I was taken in under observation. I survived but if I'd had to find my way to Northwick Park then swell the queue there ...
Anyway, all this talk about the advantages of being taken to more centralised A&E's is nonsense, when everyone knows this decision was taken to save money, and the other reasons thought up afterwards. And all to pay for PFIs and fancy buildings. It's sad to see health service professionals and administrators who think their job is to act as PR for rotten policies.