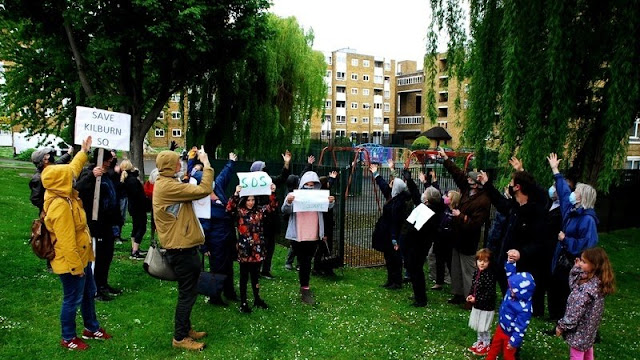 ·       After superficial “consultation” on the Estate for months, Zoom meetings with local community groups were due in early May…

·       They led us to expect that a smaller Plan B, which they clearly now have in the drawer, would be what we discuss next week

·       Cynics are connecting this with the likely shortfall in the GLA money they can spend, and the net extra units that will be achieved there; I make no comment

·       But we have now launched a petition for a smaller project: http://chng.it/xwxLyYcDhP

And if any reader lives in Kilburn (Brent), Kilburn (Camden) or Queen’s Park Wards and would like to get involved, please email me at streetgroups@mistral.co.uk

This is the wording of the petition:

Including a new block just completed, this would be an increase of over 80% on the original estate population – on exactly the same footprint.

This would mean real overcrowding, huge impact on the skyscape and light and privacy for both residents and neighbours, damage to our neighbourhood’s precious Green Lung, concerns about security, more on-street parking, pressure on local services, huge noise and disruption for the whole area during construction.

This simply does not make sense!

We have seen no supporting surveys or analyses, and it’s NOT in the Local Plan. Estate residents are being ‘consulted’ on details; but not on the scale of the scheme. They have worked hard to create a friendly, well-balanced and crime-free estate. A plan on this scale would completely transform its character and the sense of place built up over decades, and impact the local community as a whole.

We recognise Brent has an acute housing need, but this plan is much too big. The Council should revert to the smaller plan being studied last summer, while prioritising the improved housing units for current tenants.

Brent’s Director of Housing told a recent Scrutiny Committee meeting Brent ‘would not want to force homes on anyone’ – we ask that he honours these words.

So, we call upon Brent Council, and the Greater London Authority, to
1.     Reduce the size of the development to 70–75 units and protect the open space for the resident and local community, to meet GLA and Brent best design practice.
2.     Set the housing proposals within the wider context of the plans for upgrading the Kilburn High Road frontage.

To find out more, visit https://save-our-square.org or email us at savekilburnsquare@gmail.com to join the campaign. See also: https://www.kilburntimes.co.uk/news/kilburn-residents-against-over-development-7979330

Although I live at the opposite end of the borough, the problem which Kilburn Square residents face raises similar concerns to other planning matters I have been involved with. Those concerns are centred mainly on the tendency of Brent Council, and its Regeneration and Planning Officers, to ignore the Council's own adopted planning policies!

Brent's planning policies say that the Council will expect any proposed development to protect (and enhance, where possible) existing open space, and to provide new open space where a significant number of new homes are proposed.

Brent's Core Strategy (still its main basic planning policies), adopted by the Council in 2010, includes policy "CP 18 - Protection and Enhancement of Open Space, Sports and Biodiversity", the main points of which are:

'Open space (including waterways) of local value will be protected from inappropriate development and will be preserved for the benefit, enjoyment, health and well being of Brent's residents, visitors and wildlife.' and:
'New or improved provision (including improved access) will be sought in areas of deficiency and where additional pressure on open space and outdoor play facilities would be created.'

It would appear that the Council's proposed "Plan A" completely contravenes that core policy, and that should be pointed out to them!

Brent's Development Management Policies document, adopted in 2016, refers to policy CP18 as being the Borough's open space policy, and adds to it with policy DMP8. This says:

'Where open space is proposed it should be:
a. publicly accessible;
b. appropriately designed to be safe, usable and integrated into the development site;
c. enhance biodiversity and integrate into the existing green infrastructure
network; and
d. include a suitable long-term management plan.

Existing sites for food growing will be protected and food growing opportunities within major residential developments will be encouraged.

Green chains and wildlife corridors will be protected from development which would compromise its biodiversity or recreational function.'

If the Council's proposals do not meet those requirements, that should be made clear to them, and they should be told that their proposals are unacceptable.

My comment is too long, so I will have to finish it in a separate comment below!

This is the second part of my comment above:

Brent's "emerging Local Plan" will replace the Core Strategy and DMP's once it is finalised (probably by the end of 2021), but the policies in this will have to be in line with both national ("NPPF") and London Plan requirements.

The Council's own preparatory document (Open Space, Sports and Recreation Study, 2019) for the new Plan includes this: 'The NPPF provides clear policy to protect and ensure appropriate provision of open spaces to support the well-being of communities.'

include appropriate designations and policies for the protection of open
space to meet needs and address deficiencies;

promote the creation of new areas of publicly-accessible open space particularly green space, ensuring that future open space needs are
planned for, especially in areas with the potential for substantial change;

Policy G4 also says:
'Development proposals should:
1) not result in the loss of protected open space
2) where possible create areas of publicly accessible open space, particularly in areas of deficiency.'

The 2019 Study showed that Kilburn Ward already has one of the highest deficiencies of open space (only 0.11 hectares per 1,000 population) in the borough!

The latest draft of Brent's Local Plan (at para. 6.6.13 in the section on Green Infrastructure) says:

'The borough’s urban nature, limited land availability and significant population growth means that the protection and enhancement of existing green and blue infrastructure is of great importance. This will ensure its benefits
are maximised for both current and future residents and visitors. The management of development proposals will play an important part in achieving these outcomes.'

That is given as justification for a rather wordy (with a certain amount of "wriggle room") policy (BGI1) on Green and Blue Infrastructure in Brent which includes the following:

'The council will expect the provision of additional public open space as set out in Growth Area policies.

Major developments outside Growth Areas will be expected to provide 0.81 sqm of public open space per resident in the following manner:
a) In Alperton, Brondesbury Park, Dudden Hill, Harlesden, Kensal Green, Kilburn, Mapesbury Queens Park, Queensbury, Tokyngton, Wembley and Willesden
Green provision will be on site.

Where public open space is not being provided on site, a financial contribution will be sought to improving the quality and/or accessibility of existing open space provision.

For all developments: a) open space should meet all of the
following criteria:
a1. be appropriately designed to be accessible, safe, usable and integrated into the development site;
a2. enhance biodiversity and where adjacent to, integrated into existing
green and blue infrastructure network; and
a3. include a suitable long-term management plan.'

I hope that this information will be of use to the Kilburn Square residents trying to protect their green space from inappropriate development, and to anyone else in the borough in a similar situation.

Keith's message in the blog above says that background documents have not been made available to residents.

I would suggest that he, or one of his supporters, should use their rights under the Freedom of Information Act, sending clear and specific requests for information, and copies of documents containing that information, to:
foi@brent.gov.uk .

This is something I have felt it necessary to do on a number of occasions in recent years, to try to get behind the cloak of secrecy which some Brent Council Officers seem to hide behind. That is especially the case when they are trying to get the decisions they want, but which local residents might not want!

Among the things I would suggest asking for are copies of minutes / notes of all meetings between project team members for Brent's Kilburn Square proposals and Brent Planning Officers.

It is likely that there have been at least some "pre-application" consultations of this sort. Under an FoI request in connection with Brent's 2020 application for 1 Morland Gardens (which I have written guest blogs about), I discovered that an unnamed Planning Officer had told his Regeneration colleagues in December 2018 that he(?) and his colleagues were unlikely to block any proposal to demolish the locally listed Victorian villa on that site.

This was in complete breach of Brent's planning policies, but I only found out about this after Planning Committee had approved the planning application which allowed this to happen. The sooner you find out about any such dodgy practice, the more chance you have of objecting to it.

Another item that I asked for in that case was the dates of, and minutes of, Community Steering Group meetings. The report to Cabinet seeking the go ahead for the 1 Morland Gardens scheme, and the application itself, made much of this Steering Group's role in shaping the scheme. The minutes showed that it had not been brought into existence until after all the main features of the project had been finalised, and those details were presented to the Group as a "fait accompli" at its first meeting!

If the Council claim that there has been "consultation" on the details of the Kilburn Square project, and it is not clear what that consisted of, FoI for the details!

One word of caution I would give on making FoI requests. Make sure that you make clear that it is a request under the Freedom of Information Act 2000. When the Council responds to it, they will probably say that they are dealing with it under the Environmental Information Regulations 2004. If they do, challenge that claim - there are some things (such as emails between Council Officers) that the Council can refuse to provide under EIR, which they can't refuse under FoI.

Good luck with fighting the Council's "Plan A"!